“Mom, you need to understand, we’re making this decision because we care about you…”

The trip was supposed to be a tasty little weekend getaway. A quick turn-and-burn, specifically to hit the Copperstate 1000 Kick-off Saturday morning over in Tempe. Nothing but an opportunity for me to play sludgo at a Cool Car Thing with Cool Car People doing Cool Car Stuff. A Choice Gig. But then I got the call from Big Sis back in NoDak and the show took on a whole different vibe.

No More Driving. None. Not at all. Not anywhere. For any reason. Not until further notice. Not until we get this all figured out. Asked her if she understood. If she had other ways to get around. Got a silent nod back.

“Her neighbor found her passed-out in the Camry, parked halfway inside the garage. The car was still running.”

Big Sis and I knew she’d kept driving. She said she hadn’t but let it slip once during a Skype about driving to Mass, then tried to chill the situation by admitting that she’d been driving again but only when she needed to. Only when absolutely necessary. Like when she ran to Walmart to pick up a new shower head for the guest bath. Added that she was feeling pretty good. Really good, in fact. That she thought everybody was making way too big a deal of this. That it was probably just a bug of some kind and she was probably over it by now. That she was fine to drive. That she’d be careful. That we didn’t have to worry.

But we did worry. A lot. So we did what adult children with medically-noncompliant aging parents do: We barked at her. Doctor’s orders, Mom! Dangerous, Mom! Irresponsible, Mom! What if you pass out behind the wheel, Mom?! What then?! Fercryinoutloud, Mom! No more driving, Mom! Understand, Mom? Understand?!!

“She can’t remember what happened. How she got home. We’ve got to do something about this, sludge. Before something Really Bad happens.”

The cab dropped me off in her driveway. Nice place. She bought it new a couple years back. Just up the block from the double-wide she and Pop bought when they started doing the Snowbird Thing back in ’95. Stick-built. Plopped dead at the palm-tree-fringed end of the 14th hole of the Sunset Acres golf course. Large and Spacious and Modern and Stylish. Spanish-southwest-adobe outside. Contemporary and sleek and airy inside. Big garage for the Camry. Little one alongside for the golf-cart. She loves it. Wakes up early to shiny-yellow sunrises and steaming-hot coffee and fresh-baked blueberry muffins and happy hellos from cheery neighbors on the veranda. Spends her days putzing, tending to her beloved blood-red geraniums, listening to Hey Google play Willie or Adele, gabbing with her friends at Zumba or at her Bridge game or at her quilting club, splashing around in the pool or at least going for a soak in the hot-tub after dinner, then having a ‘sipper’ on the patio, watching another spectacularly-average Arizona sunset play out, the golden-bittersweet-blazing orange of the horizon fading skyward into starry deep-blue-black.

And that’s where I found her. Out on the patio. Watching the sunset. Happy to see me. Always is. Had sippers already poured. Got a big hug. A smacking kiss. Asked me if she could get me anything. If I was hungry. If I wanted to head to the pool. Hot Tub? If I was tired. Said I looked tired. Said she was excited for me to go to my Car Show tomorrow. Asked me if it was part of That Sludgo Thing. Another big hug. Another smacky kiss.

I told her to sit down. We had to talk. About Something Important. She furrowed her brow. Sat down. And I got right to it.

“Mom, Big Sis and I talked. If you don’t stop driving, I’m taking your keys home with me on Sunday.”

A Long Pause. Could hear the ice melting in my Bailey’s, the desert breeze whispering through the silhouetted palms, the coyotes in the distance crying out against the approaching night. She looked straight ahead, focusing those dark Native eyes out past the palms. Out past the stars. Then she softly smiled.

“Do you remember back when I taught you how to drive stick in the Gremlin? How we took it over to the Junior College parking lot that Saturday morning to practice and you just kept grinding the gears and killing the engine and screeching the tires and we were just laughing and laughing and laughing every time it happened until you finally started getting it right? And how happy you were then?”

She reached over her frail and thinning hand. Wrapped it into mine. Gave a squeeze.

“I won’t drive anymore, sludge. Not until they say I can. Promise. Love You, hon.”

Early Sunday. I Uber’d back to the airport. Left her keys on the counter.

“My father passed away long before I had to manage his driving at an old age. But he would have fought me for sure. A month after he’d passed away, his drivers license was revoked due to an untended speeding ticket. I thought that a fitting tribute to his legendary driving methods.

I did have to tend with an aging grandpa however. Obstinate about his skills, I plucked the coil wire from his Crown Vic.

One day we’re sitting at breakfast and he says “you want toast with your eggs?” I replied “sure”

He scoops out some eggs on a plate and lays a pair of pliers on my dish. “Eat yer eggs and then put that coil wire back on Vicky. She’ll know when I’m ready”

Yeah…I put it back.

1954 Studebaker Commander Starlight
Appropriately enough in front of the base Commander’s office! 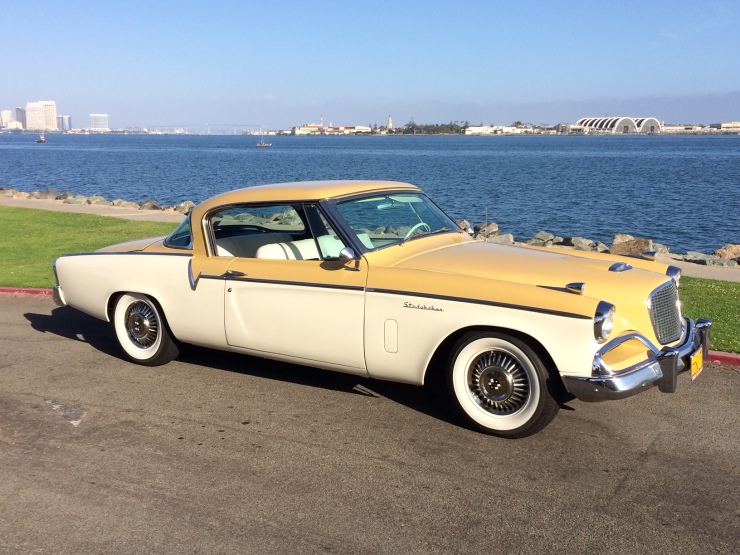